On Monday 1st October, the Wandelpad Volunteer Team, ably assisted by Clive (Mr Greenfingers) Benjamin, began the reforestation above the King Street Pump Station where alien and invasive Sambucus nigra (European Elder) had been removed. 5 Sideroxylon inerme (Milkwoods) were planted and, where possible, the area was plugged with Plectranthus ecklonii (indigenous) which not only prevents soil erosion but also provides a show of colour in late summer. There shouldn’t be a need to irrigate as there is a continual flow of water on this bank. Clive also helped with a general clean-up of the stream bed where much plastic had been washed down and deposited.

The Wandelpad Team would like to thank Penny Paddick and Liz Macmillan for their generous contribution which enabled the Team to purchase the trees. 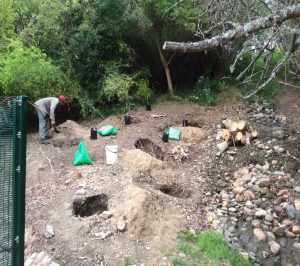 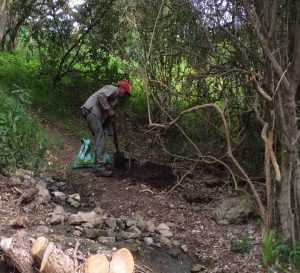